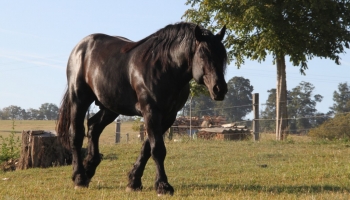 Chevalait, in Orne, is home to a herd of 200 mares and foals to produce fresh pasteurized milk for human consumption.

A daily rhythm at the foot of the horses

In Neuville-près-Sées, in Orne, the 200 Percheron mares come and go between the stall, the paddock and the meadow, depending on the milkings and meals. They form one of the last herds of horses in France, for a good cause: the production of fresh milk. The mares are accompanied by their young, without which they would not produce milk. The owner-breeder is there to support and pamper them. Hay and wrapping are at will, produced in short cooking and organic because nothing is good enough for these animals.

Chevalait's fresh pasteurized mare's milk is distributed in organic store networks. But these networks are overtaken by laws and the practices of mass distribution which considerably change the situation for producers, to the detriment of a unique product with many virtues. The company has therefore, in part, turned to e-commerce.

In addition to trade barriers, Chevalait must also deal with the regulations in force. Operators must go to Brussels to lead their crusade and demonstrate the benefits of their product.

Vanessa had to fight against the medical profession to feed her baby on mare's milk. For this mother, however, this product has many virtues and relieved the ailments of her infant. Today, mare's milk is not recognized as infant milk. In France, the dairy industry has focused entirely on cow's milk, given the yield. All studies, research and regulations relate only to ruminant milk.

The couple who embarked on the Chevalait adventure are at the head of the largest Percheron farm in Europe with some 200 animals but they are looking for new partners to develop his activity. Isolation can be overwhelming and discouraging.